Tree of Life by Paula Smellie 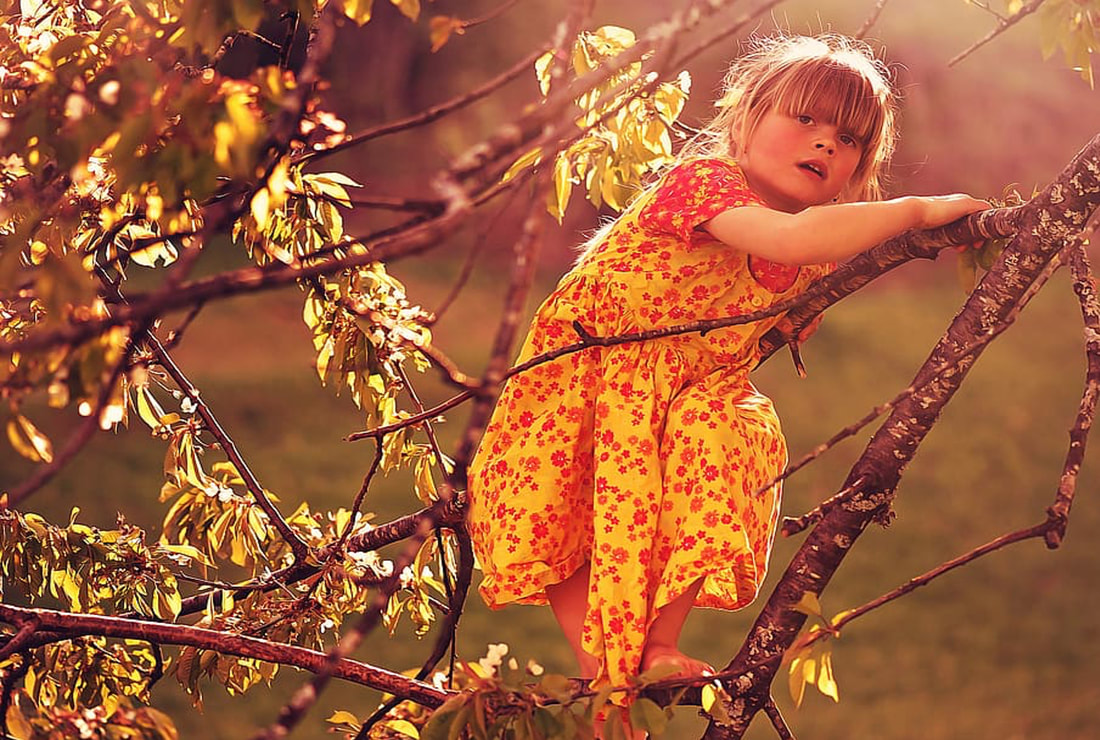 
Truro, Nova Scotia, 1976
Ribbons of sunlight fell across the tree limb on which Carol sat. She was winding strands of her golden hair around a leaf stem and reading the best book ever—Where the Wild Things Are. When she got to the part of the story where Max was sent to bed with no supper, she paused in wonder.  Just six years old, she had never been sent to bed without her supper.  Such a thing seemed like something parents would threaten, but not actually do.  Like spanking you in front of your friends or giving you something to cry about or (her mother’s favourite) giving you a swift kick in the rear-end.  Carol did have her mouth washed out with soap once.  She couldn’t remember what bad word she had said to earn that, but she did remember the bitter taste and the odd slippery feel of the Zest bar soap shoved between her teeth.  Thinking of trouble, she suddenly became aware of just how tangled her hair was.  After an hour of absentmindedly twisting leaf stems and small twigs into her hair, it was now a knotted mess.  Fear made her breathing shallow.  She closed her eyes, imagined a silver-blue star in a night sky and wished upon it that her parents would not notice.  She couldn’t afford to be grounded from tree-climbing again. Not this last summer before starting grade one at Charles Aubrey Eaton elementary school.  Carol was excited for school, but imagined it would leave little time for her to loll about in the boughs of her favorite tree.
Carol shinnied down from the tree, her denim pants and cotton t-shirt catching here and there on pieces of bark peeling away from the tree’s trunk.  She was thankful John Deere wasn’t at home—she couldn’t do anything in secret with him bouncing around, yapping and leaping at the slightest thing. The tawny Boxer was built like a brick, with a splash of white on his nose. But John Deere was still a pup, and had not quite learned the difference between food and not-food.  Hence his overnight stay at the vet’s.  She was sorry he had a tummy ache, but if he were here now, he’d just be underfoot.  He’d probably sprint into the kitchen as soon as she cracked open the door, knock over anything in his path and lick the cats’ dishes clean. Monkey and Fargo were two of the friendliest cats Carol knew and seemed to have a high tolerance for John Deere’s greedy exuberance.
Once her bare feet touched down in the cool grass, she hugged her body close to the tree’s trunk, keeping its huge mass between her and the glaring kitchen windows at the front of the house. She stuck out her tender chin to keep it from bumping against the tree and touched the band-aid her father had used to cover her latest scrape.    “My god, Carol, you’re a lucky girl,” he had said, squatting down and squinting at the blood congealing on her chin.  “You could have knocked out your teeth.  Be careful, for God’s sake. And stay off of those rocks.  You’ll get more than a scrape on the chin from me if I find out you’ve been playing over there again.”  His tone was foreboding, but his fingers were gentle as they patted down the edges of the band-aid.  The creek at the back of their property was narrow and shallow and writhing with schools of tadpoles and minnows, but the jagged outcropping of moss-covered rocks nestled into the creek’s bend were forbidden territory for Carol.
Believing the way to be clear, Carol padded stealthily across the lawn and up the three steps leading to the kitchen’s storm door.  She pushed the door open as silent as she thought Jaime Sommers might do in an episode of the Bionic Woman, poked her head through the door, and listened, just like Jaime would.  In the Bionic Woman, the camera always did a close up on Jaime’s bionic ear.  Carol imagined her own ear twitching, adjusting, tuning in to pick up sounds concealed behind walls covered in faded floral-patterned wallpaper.  Hearing nothing, Carol tip-toed across the linoleum floor tiles, side-stepping around the cats’ water dish, and reached for the sharp grown-up scissors her mother kept in the wooden knife block next to the sink. Her heart was pounding violently in her little chest, for both the scissors and the foliage in the hair had already been declared as off-limits and her mother, who was lying on the sofa in the living room, recovering from chemotherapy.  Carol wasn’t sure what chemotherapy was, but she knew it made her mother sleepy and sick.  Sometimes, she heard her mother vomiting in the bathroom.  Sometimes, she heard her crying softly behind the bathroom door.
Just as Carol’s fingertips brushed the handle of the scissors, a voice boomed from behind her, “Gotcha!”  Carol nearly jumped out of her skin.  She spun in panic to face her father.  He began to laugh, but the laughter caught in his throat when he saw Carol’s face bunched in fear.  He dropped to his knees and held her gently in his strong arms, where she sobbed and trembled into his chest.  Monkey hunkered down under the kitchen table and Fargo rubbed up against Carol’s back before sauntering out of the kitchen with his nose in the air.  Without words, her father took the scissors from the knife block and began to tease and trim the offending foliage out of her curls.  He leaned back on his heels to looked at his work.  Satisfied, he held her face in his hands, wiping her tears with his thumbs and whispered for her to go back outside and collect her shoes.  There was no need to whisper.  If her mother hadn’t come to check on them by now, she was probably asleep or had no energy to bother with them.

(This is an excerpt from my novel in progress, Tree of Life.  In this excerpt, one of the main characters, a middle-aged woman named Carol, is lost in a childhood memory in which her father played a key role.)
Powered by